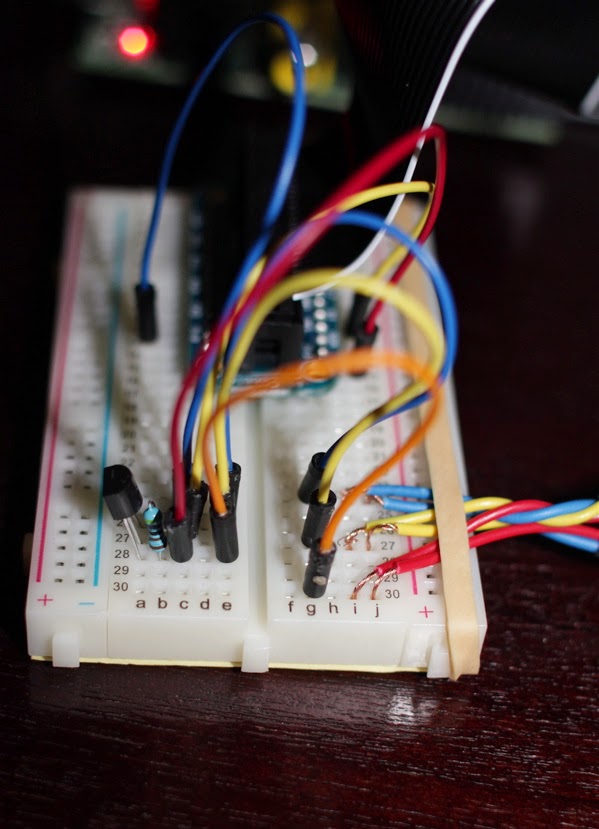 In the previous part of this tutorial, we looked at how to connect a few DS18B20 digital temperature sensors to a Raspberry Pi and read their values.

The next part of the problem is periodically collect and record these measurements and store them for graphing and further analysis.

It is always possible to store measurement data in a general purpose database e.g. SQLite or MySQL and then plot the data for example with the Google charts API.

For this project however, we are going to use RRDTool, which is a special purpose database optimized for recording, aggregating and graphing time-series data. It is particularly popular for network and system monitoring applications and for example at the base of smokeping  which we used in an earlier example. However this time, we need to configure and setup our own database from scratch.

Some of the reasons why RRDTool is particularly nice for this type of application:
Each RRDTool database is configured with a base interval in seconds, defining the pulse of the measurement system at which the data is supposed to be sampled. For each interval, it can determine the average rate from two or more samples of a counter or as for our case, the average value of readings of a thermometer.

For our temperature recorder application, we define 3 data sources, one for each of the sensors: inside, outside and heater-feed temperature. As the base clock of the system, we somewhat arbitrarily choose 5min (300 seconds) which should be a compromise between dynamic sensitivity and not trashing the CF storage card unnecessarily.

In order to be able to look at the data over different time-scales, we want to collect:

All the aggregations should be averaged, except for the longest one, where we want to keep average, max and min for each of the 6 hour intervals.

The following scripts creates an RRDTool database with these properties:

Where DS defines the 3 data-sources and RRA the different round-robin archives at various granularities, retention and aggregation types. The data sources are of type GAUGE, which means that the absolute values are used and not the rate/delta-increments as is the main mode of operation for RRDTools. The additional arguments define an update timeout (not really relevant for GAUGE types) and the estimated max/min range of the values, which in this case are the supported range of the DS18B20 sensor according to the datasheet.

The round-robin archives within the database are configured with an aggregation function (avg, max, min), a fudge-factor to define how many missing base samples we can tolerate before the aggregate itself becomes unknown as well as the number of base intervals to to be aggregated and how many of the values should be kept.

Now we need to set up a job which periodically, at least every 5min reads the temperature sensors and inserts the measurements into the database created above. The easiest/most robust way to do that on Linux is through cron, i.e. crontab -e and add the following line:

The */4 setting schedules the collection job to run every 4 minutes, which is a little faster than required, but helps reduce the risk that we miss any sample period. RRDTool will automatically create an average value for each base sampling interval for which we record at least one data-point (otherwise the value is unknown). One of the advantages of RRDTool is the proper handling of missing values. Those are simply ignored and create gaps in the graphs and don't affect the aggregated values.

Assuming the files for this application are going to live in /opt/templog and are running as the user pi, we can create this directory with

And create the following script in /opt/templog/python/templogger.py:


This script sets up logging to syslog, as we want to avoid any output to stderr in cron. We declare the 3 sensor access objects based on the ID which correspond to each sensor (see part I). Since reading a sensor can occasionally fail, we can retry a second time.

Now that we have data accumulating in the RRDTool time-series database, we will be looking at visualizing the data in the next part.