March 02, 2012
Recently I was looking around for cheapest, smallest device which easily can run linux and which can be bought in small quantities down to one. The particular application in mind was to build a linux based print-server which exposes legacy USB or network connected printers via Apple AirPrint for iPads and iPhones or Google CloudPrint for ChromeBooks or some Android devices and maybe could provide some other services to such thin-client, "cloud-top" devices (local file server and/or backup, wifi/network gateway etc.).

A few years ago, I had a first compact, fan-less home-server in the form-factor of a mac-mini, i.e. about the foot-print of the optical drive it contains. Like the mac-mini, this was basically a compact PC, made largely out of laptop parts. 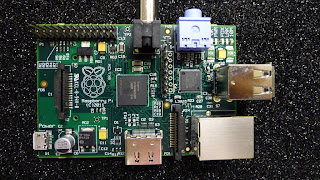 It seems that the clear winner in terms of cost today is the new Raspberry Pi board at $25/$35, whose launch this week caused an Apple-style opening-hour stampede on the online store selling its first production batch. It is a minimalist bare-board computer, about the size of a credit-card and based on a Broadcom BCM2835 embedded multi-media engine with a 700 MHZ ARM core. The Board a USB port/ HDMI & composite video output, some low-level IO (GPIO, I2C, SPI etc.) as well as 10/100 Ethernet port on the $35 version. Not included in the price is an external 5V micro-USB standard cell-phone power-supply, an SD card and maybe a case. With these extras the final price would likely be in the $50-$100 range. The heavy emphasis on video would make the Raspberry Pi ideal for applications which require a TV connection or some other form of display.

An alternative for less visible, network connected servers could be to use a plug computer. They seem to have typically a beefier CPU core, more networking options and often come in a case with integrated power-supply and wall-plug, so that they can be plugged directly into a power-outlet. Prices for a single unit seem to range from about $100 to $250.

However, since brand-new AirPrint capable printers are starting at around $100 as well, this project seems not worth its while, at least not just for re-using low-end home printers, e.g when moving to an iPad as the primary home-computer.