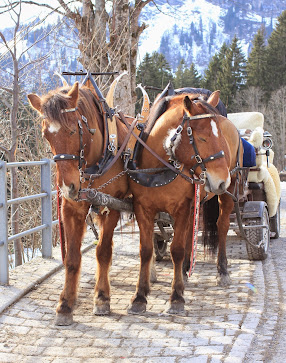 De-carbonization will require in particular a radical transformation of the energy and transportation sectors over the next few decades. Many people find this daunting or fear that it might be not even be possible in such a time-frame.
Looking at the history of de-horsification, a similarly radical transformation of the transportation sector in the first half of the 20th century shows that such things are indeed possible, but can be tricky, disruptive and take a long time.
At the beginning of the 20th century, the horse was undoubtedly the workhorse of urban transportation for both goods and people, while the new horseless carriages were expensive and unreliable playthings for crazy, rich people. Less than 50 years later the roles are reversed and most horses today likely travel more miles standing in a trailer pulled by a SUV than on their own feet. In 1900, horses were very common - nearly as common per capita as cars are today. New York City counted over 200'000 working horses in 1900, today there are just a few dozen - including those of the NYPD mounted police.
The reasons why millions of horses were replaced by millions of cars and trucks over the course of a few decades is somewhat disputed - likely that cars somehow presented an improvement overall.
Initially, cars were much more expensive than their horse powered equivalents, but according to these claims, even today they are slightly more expensive.
Some argue that economic arguments were not the primary motivation, but the growing piles of bio-waste threatening to overwhelm the rapidly growing urban areas. Others argue that the environmental crisis theory is likely a bunch of horse-sh*t...
Undoubtedly the transformation required and/or triggered massive changes in infrastructure as well as to the fabric of society. Thousands of horse stables disappeared from city streets and or were replaced by parking garages and gas stations. Entire professions like wainwrights, teamsters, blacksmiths or horse breeders became irrelevant over the course of a few decades. A rather decentralized industry of horse breeding, carriage making and growing horse feed was replaced by a highly concentrated automotive and fossil fuel industry. Fortunes were made and lost as part of sweeping socio-economic changes, causing plenty of excitement and anguish and spanning a period of great turmoil with two world wars and a major economic crisis.
While this particular history shows that such radical transformations of entire sectors are possible and have happened in the recent past, it does not provide any guidance on whether they can be accelerated or whether the associated disruptions to peoples lives can be easily avoided.