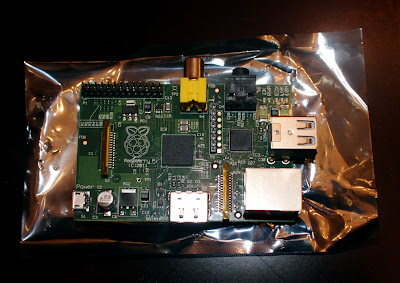 Looking for low-cost linux hardware, I had come across the Raspberry Pi project a few months ago and been hopefully intrigued by its goals to promote "computer literacy" (whatever that means).

Now that you can actually get them more easily, I ordered myself one from Farnell and surprisingly it arrived in a few days. I am glad to see that the popularity of the Raspberry Pi device is creating an active community, where detailed help and instructions are easily available - not an obvious thing for other niche and esoteric hardware.

I was going to set it up as a network server and access it from my PowerBook via ssh, X11 and/or VNC. Getting a bootable SD card was very easy, also in part thanks to such detailed instructions, but requires access to another computer with SD-card reader and Internet access. Using a spare micro-USB cellphone-charger and an ethernet cable to connect directly to the home router was all that is needed to complete the setup. After that, it got a bit trickier: since I couldn't easily figure out the IP address and try to see if ssh access was enabled by default, the path of least resistance was to connect the TV via HDMI to see how/if the Raspberry Pi had booted (it did...) and use a keyboard to complete the config menu and dorp into the shell to see its network config. HDMI cable and keyboard were temporarily borrowed from the mac mini, which sits next to the router and TV in the living room.

After that, the experience was quite smooth - logging in via ssh, installing some new packages and as a test-project, setting up an Apple air-print (instructions here) and Google cloudprint (and here) proxy to our existing network printer went without a glitch. And to top it up, export the ssh service via Bonjour/mDNS (instructions here) so that the device can be reached via ssh raspberry.local no matter what strange IP the router decides to assign to it next.

Through the command line at least, the Raspberry Pi is a surprisingly capable general purpose computer. It feels at least as fast as some of the PC hardware I had run linux on in the early 90ies... More so, the combination of low-cost hardware and filesystem on removable flash card makes it very hackable, without any fear of destroying or "bricking" anything. I have never before used "sudo" with so little hesitation...

The cheap, almost "disposable" hardware in combination with the commodity removable storage, really helps to make the Raspberry Pi a safely "hackable" device, in the tradition of the ROM + floppy-drive based home computers of the eighties.

It seems that the primary use-case which the creators of the Raspberry Pi had in mind was that of a possibly even non-networked (model A) desktop using USB keyboard, mouse and a TV as monitor, kind of like the 80ies home computers. Given the ubiquity of computers today, I don't know how common the headless, networked usage would be - by either connecting it to the home router as I did, or directly to the now mostly unused ethernet port of a PC or netbook.

Maybe it would be worthwhile to improve the bootstrapping of this headless, networked configuration in the standard boot image by automatically announcing ssh via mDNS for both IPv4 (if there is a dhcp server on the network) or via IPv6 using the link-local zero-conf addresses. That way I could connect a new Raspberry Pi board directly to the ethernet port of a mac at least (and hopefully windows PCs as well) and ssh into it without the need of any further network configuration or knowledge. 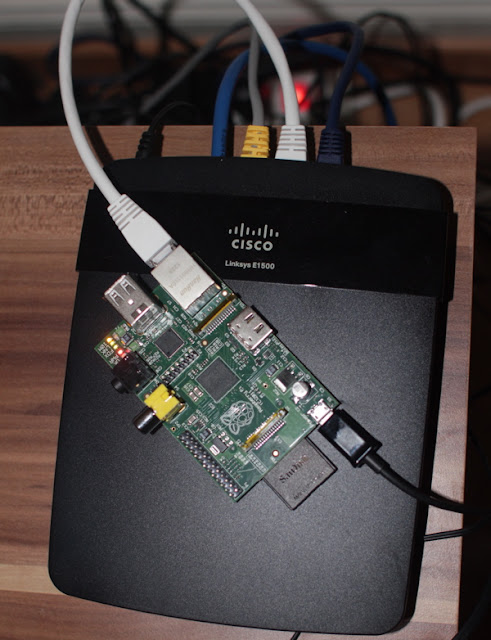